Spying on malaria parasites at -196 Celsius

By combining two advanced microscope techniques an international team of scientists led by postdoc Sergey Kapishnikov from the Niels Bohr Institute has managed to obtain new information about the ravaging mode of operation applied by malaria parasites when attacking their victims. This information can be utilized when designing new medication to more effectively fight malaria - a disease claiming over 400.000 lives each year, a majority of whom are infants. 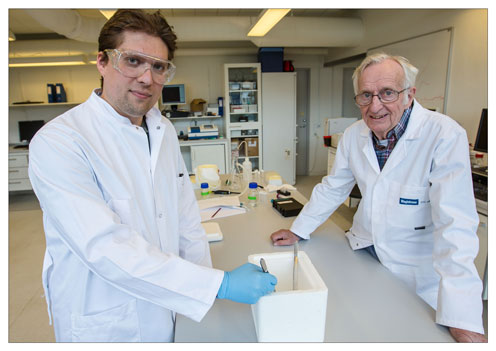 Sergey Kapishnikov and Jens Als-Nielsen in the laboratory at the HC Ørsted Institute in Copenhagen.

Conducting real-time studies of a malaria parasite is difficult - you have to keep it on a very short leash to stand a chance of succeeding. And the leash, which allows for close-up examination, may involve the use of liquid nitrogen. This is shown in an international research project headed by postdoc Sergey Kapishnikov from X-ray and Neutron Science at Niels Bohr Institute (NBI), University of Copenhagen, Denmark.

The project, which will appear as an article in this weeks issue of Scientific Reports , has come about as a co-operation between research institutions in Denmark, Germany, Switzerland, Spain and Israel - and besides Sergey Kapishnikov NBI is represented by professor emeritus Jens Als-Nielsen.

The scientists took advantage of the well established fact that all life processes in biological material are 'bliz-frozen' and thereby suspended if the material is kept in liquid nitrogen, says Sergey Kapishnikov: 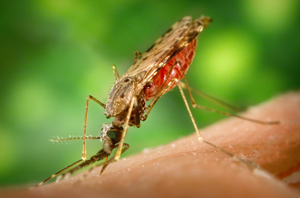 Ready! Set! Bite! A malaria mosquito - an Anopheles albimanus - all set to suck blood. The genus Anopheles has about 400 species - some of whom spread malaria. These mosquitos are vectors, i.e. they transmit infection to other organisms. Malaria mosquitos display hairgrowth on the 'back part' of their body, the abdomen - unlike other mosquitos that bite humans.

"In the lab we infected human red blood cells with malaria parasites. We then - ultimately - placed the infected blood cells in liquid nitrogen which at -196 Celsius is extremely cold - and that way we were able to get new information about how the parasites work when they demolish the victim's red blood cells. Observing this also gave us a number of new and creative ideas as to how the parasites can possibly be derailed - e.g. by tailoring a drug which can sabotage their waste disposal system so that they would end up drowning in their own litter. This is something we will examine further, and we are definitely looking towards developing concepts for new types of medication against malaria. Such antimalarials are sorely needed - since whenever a drug has been in use for some time, resistance against it will inevitably pop up and start spreading, and then you obviously need to intoduce new medications".

Sergey Kapishnikov and his colleagues were able to carry out their investigation thanks to two different forms of advanced microscope examination: X-ray fluorescence microscopy (XRF) and soft X-ray tomography (SXT), conducted at synchrotron facilities in Spain, Germany and Switzerland.

Combining the two methods enabled the scientists to locate where - internally - the damage-causing parasites store iron (in the form of heme-molecules). This iron - which is very poisonous and potentially lethal to the malaria parasites - orginates from the victim's red blood cells, which the parasites have invaded, explains Sergey Kapishnikov:

Click the picture to see the basic features of the Plasmodium life cycle.

"The parasites develop in the victim when he or she is bitten by a malaria infected mosquito - the initial phase of development taking place in the victim's liver. From there-on the parasites are released into the blood stream and multiply at high rate while invading still more red blood cells - and if medical treatment is not undertaken, the person will eventually be at risk of dying from this attack. And while the parasites are ravaging, they degrade hemoglobin in the red blood cells where they are 'nesting'. At the same time, however, the parasites have to deal with an ever-present challenge, says Sergey Kapishnikov:

"They must get rid of heme, the iron-part of the hemoglobin they are destroying - and it is well known that the parasites solve this problem by crystallizing heme. This means that the iron is now locked safely up and therefore neutralized so that it no longer represents a threat to the parasites. Yet science is still struggling with a number of questions and explanations related to the crystallization process. Which was why we designed a set-up whereby we - thanks to XRF-microscopy as well as SXT-tomography - were able to create 3D images of malaria parasites in human blood cells. Which made it possible for us to see details never described before - some pertaining to the localization of heme in the parasites, some linked to the crystallization process", explains Sergey Kapishnikov. 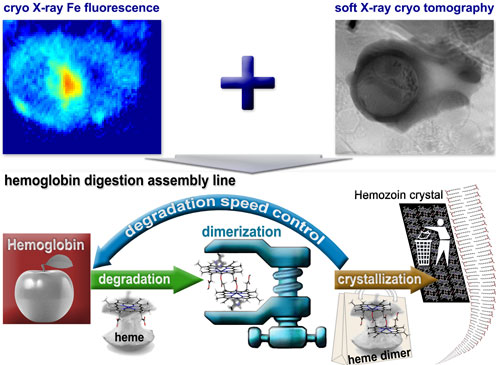 Parasites in action: The combination of X-ray fluorescence microscopy and soft X-ray tomography (top) enabled the scientists to study in detail how malaria parasites create havoc in human blood celles. The studies were conducted at -196 Celcius. The bottom half of the illustration shows the 'hemoglobin cycle': The parasites, 'nesting' in the center of human blood cells (symbolized by the apple in the red Square), degrade hemoglobin. The parasites must, however, get rid of the heme - the iron part of hemoglobin - since heme is toxic for parasites - and the parasites solve this by crystallizing heme. A form of waste management which effectively seals the heme. The scientist were able to see the contours of a process relating to a form of 'degradation speed control'. Now they want to target this feed-back principle in order to make malaria parasites choke on their own waste. Illustration: Sergey Kapishnikov

When analyzed collectively, the scientist argue in their paper, these observations point to the likely existence of some sort of feed-back principle - a principle central to the speed and execution of the hemoglobin digestion and the crystallization process carried out by malaria parasites.

"We hypothesize that this mechanism controls the speed at which the malaria parasites are digesting hemoglobin - and thereby also limit the rate of release of the toxic heme", says Sergey Kapishnikov:

"If that is indeed the case, you may possibly stop the malaria parasite from surviving by targeting this mechanism with a drug. Such medication might be aimed at speeding up the release of hemoglobin in malaria infected human red blood cells to such a degree that the parasites would not have enough time to carry out the crystallization process. Which would leave them to die from their own toxic waste".

The scientists will also look at the possibility of manipulating and derailing a specific protein believed to 'facilitate' the transition between the parasites' heme-excretion and the subsequent crystallization. This research, planned to go ahead in the near future, will be carried out in co-operation with American colleagues.

A blood bank kindly supplied the scientists with THE red blood cells they needed, and the scientists decided to infect these cells with Plasmodium falciparum, the most feared among the five types of malaria which infect humans. And once the malaria attack in the test-cells had reached a certain level, all cells were exposed to liquid nitrogen - 'speed-frozen' at -196 Celsius - and then subjected to further examination, whereupon eight (8) cells were singled out.

In order for the selected cells to be studied via XRF as well as SXT they had to meet certain criteria, says Sergey Kapishnikov: "The cells had to be without damage - and the ice-coating surrounding them could not be too thick - otherwise it would be impossible for us to observe the parasites within the blood cells. It took quite an effort to localize these eigh perfect cells, but now we know how to trace them - so the next time we will be able to go ahead with a far greater number of malaria infected cells".

One of the challenges which the scientists encountered had to do with transporting the infected blood cells back and forth among the participating research institutions, says Sergey Kapishnikov:

"From the moment the eight cells were singled out for the experiment and until it was all over, the cells had to be kept at -196 Celsius. This meant that whenever we transported the cells, they were kept in small tubes stored in a special suitcase which weighed approximately 20 kilogram. At some point I had to bring this suitcase - which I was guarding zealously - from Israel to Germany, and it actually took a lot of paperwork in advance to convince the authorities of these two countries that they could safely let me board as well as disembark the plane - suitcase in hand".

Sergey's research at the Niels Bohr Institute is financed by the Carlsberg Foundation.